I have never been very good at art. Dramatic Arts yes, music definitely, but visual arts were never my cup of tea. Despite this, I asked for and received an adult colouring book for Christmas, and I must admit that I’ve become slightly obsessed with it. I have spent so many hours flipping through the pages, trying to select which one to colour, then agonizing over which colours to choose, then engaging in the slow and meticulous process of filling in the design. And although colouring is not visual arts per se, my somewhat meditative hours spent in the book have brought me to reflect on my very first statement and the nature of learning.

Reflection 1: On the Messiness and Scariness of True Learning 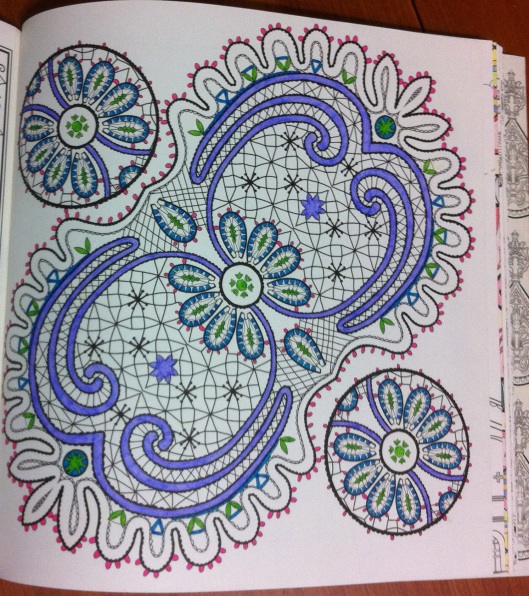 I began this post stating that I’m not good at art. Most of that is my own fault. As a child and a teenager, if I wasn’t good at something right away, I stopped pursuing it. Fortunately (or maybe unfortunately?), at the risk of sounding braggy, I had a natural aptitude for enough things that I had the luxury of avoiding those areas where I struggled.

I have always said that I love to learn; as a child, as a teenager, and as an adult, I have never strayed from the desire to discover new knowledge and skills (I mean, look at the title of this blog!). But reflecting now, the learning that I loved as a student was the easy, neat kind: the kind where the next piece of knowledge followed logically from the previous and fit perfectly into my cognitive construct, where the next part of the skill flowed perfectly and built directly upon the foundation I already had. When learning was too challenging or messy, I ran for the hills. Again, at the risk of sounding braggy, I was a gifted identified student and considered by my peers and teachers as one of the top students in my grade, but my mindset was so narrow and fixed. So many of our students, especially those who are gifted or who usually pick up on new concepts quickly, do respond as I used to and avoid the struggle.

It wasn’t until my math courses in university that I encountered a situation where I couldn’t avoid the struggle anymore. This was the first time that I found math to be truly difficult, and I couldn’t just pick another course as math was my chosen minor. I had to engage in some productive struggle and stretch myself in order to understand, but in the end, some of that learning was so much more satisfying than any of the learning I had done before. Again, even though colouring is not me creating a visual arts piece from scratch, I’m considering it my first small step toward stretching myself in that area and truly learning some new skills.

Every time I have gone outside the lines on my drawing so far I have cringed. The patterns are so intricate that sometimes a small error is unavoidable. But when I zoom out and look at the whole image, those little imperfections fade away, and all I see are the beautiful colours and patterns.

As a teenager, you guessed it, I was a pretty hardcore perfectionist. Those tendencies still rear their ugly head from time to time now in my adult life, but as an educator my mindset really has changed. It was always so important to me to pour hours and hours into each project and task, to script and time oral presentations exactly to the teacher’s specifications, to check and double check and triple check math questions – all with the mindset that the final product was final, the endpoint, and there would be nothing more to take from it once it was completed and submitted.

Now I know, and try my very best to demonstrate to students, that there is still learning to be had and that perfection is not the ultimate, nor really an attainable goal. Instead the focus should be on continuously learning and improving, reflecting on those products that were thought to be final. In French classes, so many students are afraid to speak in discussions because they don’t want to make a mistake (totally the teenage me). As a teacher, I always call attention to my own oral production. As a bilingual person and a teacher of the language, I still make the occasional grammar mistake when writing or speaking, or can’t find the word I want to say and need to talk around it or use a more basic word. Obviously my students (and myself) are working toward more grammatical precision, but at the end of the day, if their message is clear despite some mistakes, then the goal of the communication has been accomplished – just like when I zoom out of my coloured image and my scribbles outside the lines become less and less evident. As long as we are improving each time we engage in a task: whether that task is a math problem, engaging in a second language conversation, or colouring, then perfection ceases to be the be-all and end-all goal. Learning instead takes its place in the forefront.

Funny the thoughts a simple colouring book can provoke. 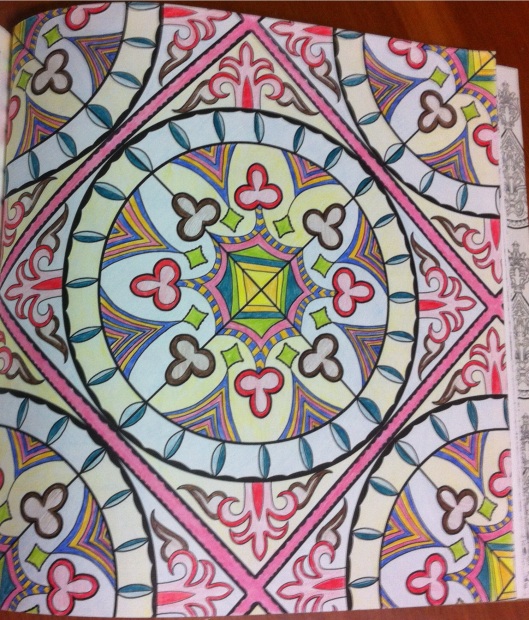 4 thoughts on “Staying Inside the Lines: Reflections on Learning from my Adult Colouring Book”